Who is Antonin Scalia? 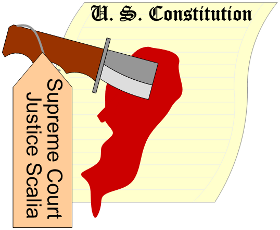 I was reading 30 Seconds After Denying Court Is Politicized, Scalia Says Democrats Do 'Not Stick To The Text' Of The Constitution. The article itself is a rather shallow accusation that he was accusing Democrats of being "political"...and then he 30 seconds later proved he was not as apolitical as he likes to claim.

But I did some research on "substantive due process" and "fundamental rights", and I find that Scalia's comments say a lot about him, beyond just that he is conservative. Since that process is used to protect rights not listed in the Constitution, Scalia is (in effect) saying that he would roll back many of our so-called rights.

For example, the fundamental rights of "life, liberty, and pursuit of happiness" are not in the Constitution; these have been imported into SCOTUS decisions from the Declaration of Independence. So Scalia in consequence of his statement appears to hold that you have no right to life, no right to liberty, no right to pursuit of happiness. Other rights affected would include the right to unrestricted travel, the right to vote, and the right to privacy (which itself includes right to marriage, procreation, abortion, private education, contraception, and even of the right of families to live together in the same place).

It appears that he would regard the Ninth Amendment and the "[reserved] to the people" clause of the Tenth Amendment as completely empty; for without "substantive due process" the people have no rights except those Rights enumerated in the first 8 amendments (which his past rulings show he interprets to give the state, and corporations, almost unlimited latitude).

If he were given unrestricted ability to issue rulings according to his whim, our country would become a very poor place indeed. I have to think we would be like Russia, under his authoritative interpretation of law and Constitution; and if I thought he was conservative before, now I have to think he is frightening.


Someone claimed that the Forteenth Amendment gives citizens the Rights of life, liberty and pursuit of happiness; in that it states these cannot be taken without "due process".

I didn't clarify above, but there are two major branches of "due process", called "procedural due process" and (I mentioned above) "substantive due process". The former deals with fairness of the legal process (the court process) and the fairness of laws; the latter primarily protects citizens from policy enactments which exceed the limits of government authority.

Without substantive due process, the government has to treat you fairly (like everyone else) but it can take everyone's Rights away, so long as they are taken fairly from everyone.

For him, it seems, the Fourteenth Amendment might as well not exist, since his interpretation of it would likely not limit any government policy.
Posted by Coyne Tibbets at 5:38 PM

Email ThisBlogThis!Share to TwitterShare to FacebookShare to Pinterest
Labels: Justice