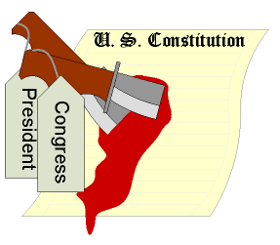 There is a lot of nonsense passed around about how "un-American" it is that the Supreme Court can overrule laws made by our Congress (or the President).  For example, very recently,  Presidential hopeful Newt Gingrich said:


[...] the fact is the Congress can pass a law and can limit the Court’s jurisdiction. There is no Supreme Court in the American Constitution. There’s the court which is the Supreme of the judicial branch, but it’s not supreme over the legislative and executive branch. We now have this entire national elite that wants us to believe that any five lawyers are a Constitutional convention.

(Now I don't mean to pick on Newt Gingrich here: What he said is commonly said, with variations, by many other people. His statement is just a handy example and not extraordinary.)

This is part of the definition of the Judicial powers of the Constitution (excerpted from this transcript):


Article III. Section 1. The judicial Power of the United States shall be vested in one supreme Court, and in such inferior Courts as the Congress may from time to time ordain and establish.

Article III. Section 2. The judicial Power shall extend to all Cases, in Law and Equity, arising under this Constitution, [and] the Laws of the United States, ...

Let's consider the issues of whether the Supreme Court exists in the Constitution, and whether all of its authority is controlled by the Legislature:


"There is no Supreme Court in the American Constitution."

It is true that the name "Supreme Court" does not appear in the Constitution.  But neither do the names "White House", "Capitol", and "Washington": Should we say these don't exist? It is clear that there is one "supreme Court" for the "judicial Power", which has nothing to do with what we call that Court. (We could call it the "Court of the Big White Pillars" and it would have the same Power.)

Since the "supreme Court" has "judicial Power" that extends "to all cases [...] arising under this Constitution, [and] the Laws of the United States", it always has this jurisdiction (that cannot be taken by Congress). To say that Congress can restrict the Supreme Court's jurisdiction is, therefore, not completely true.

But there is a more subtle issue with Mr. Gingrich's (and similar statements by others)  that bothers me much more than the issues above. To understand just how dangerous these statements are, to our Country, you need a bit of background.

Early in the history of the United States, there is a case called Madison versus Marbury that was decided by the Supreme Court. The case was a petty dispute at best (I once saw it described as a pair of 4-year-olds arguing over a toy) but the dispute doesn't really matter: It is important to our country because of a portion of the ruling that resulted.  Chief Justice Marshall wrote (my emphasis):


The constitution is either a superior, paramount law, unchangeable by ordinary means, or it is on a level with ordinary legislative acts, and like other acts, is alterable when the legislature shall please to alter it.

The first paragraph describes two alternatives: Either the legislature can or can not override the Constitution at will (by ordinary legislative means--that is, by simply making a Law). So the second paragraph translates to this:


Certainly all those who have framed written constitutions contemplate them as forming the fundamental and paramount law of the nation, and consequently the theory of every such government must be, that an act of the legislature repugnant to the constitution is void.

Translation:
It is this specific ruling, in the case of Madison versus Marbury, in which the Court first recognized its implicit Power and duty to consider the constitutionality of Laws: Because if the Court has no such Power and duty then the Constitution is futile.

Without Madison versus Marbury

Once a long time ago, being in a law library with someone else and having free time on my hands, I took the time to find and read the Russian Constitution of 1918. Well, part of it, anyway--it is hundreds of pages long--so I focused on the Bill of Rights. Would it surprise you to know that the 1918 Constitution gave the Russian people more Rights than you and I have? "Wait a minute", you say, "The Russians have no rights. That is what the cold war was about: Freedom."

...and that is exactly correct.  You see, in Russia, the decision went the other way: Their supreme Court decided that their legislature could override their Constitution at will. So their legislature deleted the people's Rights. It took less than 50 years for the Russian legislature to delete the Rights of the Russian people: Do you really think our Rights would have survived for 222 years without the protection of the Supreme Court?

Without the Madison versus Marbury decision, it is likely that you would today have no Rights at all. Your Rights would have been deleted by a Congress and President concerned about your safety, earnestly trying to protect you, and setting those Rights aside because it is, "...too hard to protect you with your Rights impeding the government from protecting you."  (In fact, our government has tried repeatedly to delete our Rights: Consider the Sedition Acts, the Computer Decency Act, the Patriot Act.)

So: Does this sound like a good thing to you, to have all your Rights deleted by the Legislature or President?  No?

Well, a lot of people think it would be just fine. Let's finish up by re-examining part of Mr. Gingrich's quote:


There’s the court which is the Supreme of the judicial branch, but it’s not supreme over the legislative and executive branch. We now have this entire national elite that wants us to believe that any five lawyers are a Constitutional convention. That is profoundly un-American and profoundly wrong.

So what Mr. Gingrich (and so many others) really mean  when they say things like this,  is that the supremacy of the Constitution over the legislature and executive is wrong; that the Congress and President should be able to pass any Law they wish and the Supreme Court should be just a big "rubber stamp"; it's majority of "any five lawyers" blindly affirming every Law that should come along.

It is those who would ignore the Constitution and who resent the Supreme Court, who are profoundly un-American and profoundly wrong.
Posted by Coyne Tibbets at 12:43 PM